Can enrolling your child with ADHD into a martial arts programme help him or her to focus more in school?

Several studies have shown that physical exercise has a positive impact on children with ADHD, increasing mental alertness and improving social skills. One study showed that loneliness, shyness and hopelessness were less prevalent in teens with ADHD who were physically active. Another study showed that aggressiveness and hyperactivity decreased in children who participated in physical activity

During a study by Dr. Matthew K. Morand, teachers completed a behaviour checklist for two groups of children, both of which had ADHD. One group participated in a martial arts program during the 12 week program, the other group did not. According to the study, the children with ADHD:

According to Dr. Morand, martial arts differs from other forms of physical activities because “there is a systematic influence of meditation, rhythmic breathing, and relaxation amounting to self-hypnosis; adherence to etiquette; constant group reinforcement; mutual help and criticism; and a sense of group cohesion with shared goals and ideology.” Individuals with ADHD may also have wandering, chaotic thoughts and the repetitive exercises found in martial arts can help in organizing those thoughts. 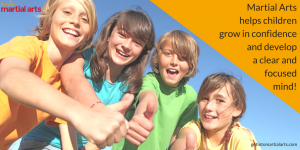 There are many different forms of martial arts, for example, Ju-Jitsu, Tae Kwon Do, Kung Fu, Karate, and Aikido, and each one has an individual focus. All, however, teach mental discipline through structure and consistency. And children with ADHD thrive in structured and consistent environments. In an article in Balanced Living Magazine, Dr. John Ratey states that he believes martial arts can help children with ADHD more so than other exercise programs and hypothesizes that there is a change in brain activity when a person studies martial arts.

Some parents may be concerned that teaching martial arts is advocating violence, but the opposite is actually true. Children learning martial arts are taught that violence is a last resort. Self-defence is taught and practiced but it is explained that non-violent, non-physical ways should be used first, physical attacks should only be used when absolutely necessary and only for self-defence.