Michael is responsible for delivering Anti-Doping Workshops on 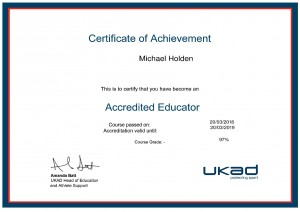 behalf of the National Governing Body for Ju Jitsu the BRITISH JU JITSU ASSOCIATION GB.
He will work with and report back to the National Executive of the BJJAGB in his new role to educate both coaches, students and support personnel in the area of Anti Doping and to recruit and train regional officers to do the same.”